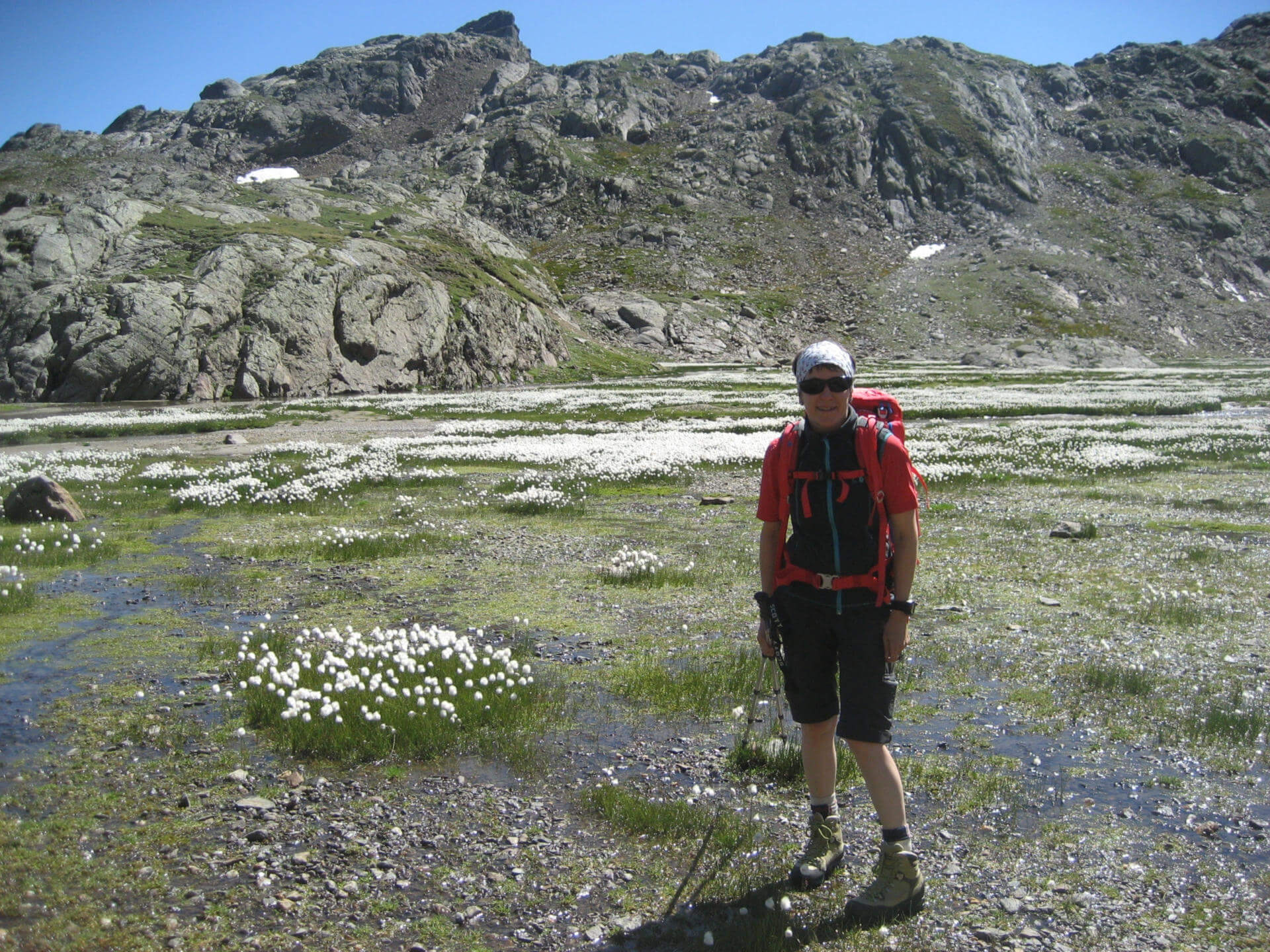 I can’t do without mountains! Tatonka’s product manager Martina Länger is convinced of this every time. Just recently she went trekking for four days in the Stubaier Alps.

I really can’t say exactly why I enjoy so much being in the mountains. Did I maybe inherit the gene? It doesn’t matter if it is summer or winter, if I am on foot, cycling or skiing in the snow – the only thing I know for sure is that I can’t do without the mountains.

The question: “Why do we climb mountains?” was best answered by Sir Edmund Hillary who said: “Because they are there”. And because there are still so many mountains out there waiting to be discovered then off we went in August to a tour from chalet to chalet in the southern Stubaier Alps, (which belong to South Tyrol).

The tour can be found in the book “Chalet Treks” by Mark Zahel where it is described as the tour “between Ridnaun and Passeier”.

From Sterzing the first part of the journey is by the local bus up to Jaufen Pass. Our tour begins just below the pass on the north side of the mountain ridge. Today we travel always in the direction west and for the next four days on foot.

For a good hour we can still hear the traffic noise from the pass road as we cross through the ski region Jaufen Pass. But then the route changes to the south side and we have the feeling that we have found the peace of the mountains.

High above the Passeier Valley the route leads up past the Fleckner Chalet, where we call in for a short break. Our tour was supposed to continue over the two peaks Fleckner and Saxner, but these were overcast with clouds and so we stayed on the south side on the Passeier Höhenweg. In weather terms, we were somewhere between a high in the south and a low pressure area in the north without knowing which conditions would prevail.

Our highest point on this first day was the Glaitner Hochjoch 2,389 m, which we reached in the early afternoon. Up here the wind was blowing fiercely around our ears and so we quickly wrote our greetings in the peak visitors’ book, put our warm clothes on and continued on our way.

At Tatonka you will find hiking backpacks in different sizes and with different features.

Whether for day trips or hut hikes lasting several days.

After a short stony descent where the route was hardly recognizable across lush alpine pastures we were still high above the Passeier Valley. In the meantime the dark clouds were hanging over us. Unfortunately the anticyclone from the south had not been able to assert itself and it began to rain.

Now it was high time for rainwear. We had hardly just put on all our rain jackets and ponchos, pulled over our rain capes as the storm started.
The rain made the narrow steep meadow path really slippery and we had to go really carefully for the last part on the Hochalm, to our next destination for the day. The landlord of the chalet welcomed us heartily and we were shown to a cozy room. It was a real pleasure to take a hot shower which you don’t find in all mountain chalets.

There was a real storm raging outside and so we appreciated even more the warm room where our host, who is also a cookery teacher, served us wonderful south Tyrolean dishes – including especially one of the best “Kaiserschmarrn” we had ever tasted (and we have certainly eaten quite a few!). A better end to the day is hard to imagine.

7.30 a.m.: The weather was still not very inviting to start out hiking: Four degrees, very windy and fresh snow on the summit. We therefore decided to enjoy our hearty breakfast for a little longer.

At 9 a.m. we said goodbye to this very special Hochalm and agreed that we must return here one day. Our route for today takes us to the north as we climb up a steep and narrow footpath. To the right of the path a steep upward rise, to the left a deep descent to the Passeier Valley – the expression “sure-footedness” sprung to mind as this was absolutely necessary.

In part the path is also secured with a rope for extra safety. This is definitely a good idea but nevertheless, you need a good head for heights. In parts we needed both hands to scramble up. We soon reached the highest point of today’s trek, the Hochwart at 2,607 m. Unfortunately there was also a strong wind blowing here too, and so we did not stay long. We stayed at this height on a narrow path before we descended again through a stonefield.

We cross numerous streams, accompanied only by cows and sheep and occasionally hear the whistle of a groundhog. After descending for a while we find a nice place under a rock face where we take a break away from the wind. We spread out our “Pfefferbeisser”, spicy sausages, “Schüttelbrot” bread, cheese, dried apricots, nuts, chocolate and, and and … On this second day we still have our full selection.

We are still wrapped up in our hats, gloves and jackets and so we decide to move on – uphill and downhill, steep uphill through the saddle and downhill on the pasture slopes. The views everywhere are absolutely wonderful. We are fascinated by this splendid landscape and from the seldom-frequented route which without the signposts, would be hard to identify.

Slowly but surely we approach the Schneeberghütte, where we plan to spend the night. The landscape changes as we now hike through the former mining territory of the Schneeberg. Up until 1967 zinc and lead were mined here at over 2,000 meters. Unfortunately this also had consequences on the landscape. Huge mountains of rubble now present a bizarre scene. We pass a number of former mining works and of course one can only imagine how hard the work must have been in former times.

Today we were also greeted in a very friendly manner and we took occupancy of an extremely comfortable room. Between delicious afternoon cake and our evening meal there was time to visit the Mining Museum. History lessons in the mountains, coupled with mineralogy – a fascinating mix!

After so many impressions, we spend a starry night under a full moon, cozy under our typical check pattern bedding and dreaming of the next day.

We awoke to a morning of sunshine and blue sky. Only up here is the sky so blue! Well, that’s what they say. We have planned 6 hours of hiking (not taking breaks into account) and so we depart at 7.45 a.m.

Today we are going in a northeast direction. We go up to the Schneeberg Saddle and in part there is ground frost. Here at 2,650 m we feel the first rays of sunshine and see the breathtaking panorama stretching out in front of us. What an unbelievable gift!

On the sunny side of the saddle we go downhill again on stony serpentine paths. The sun is warming and at last we can unpack our shorts. We cross several steep meadow slopes and rock outcrops with very few signs and are met with the bleating of numerous sheep. You get the feeling that maybe they want to “talk” to us.

The second ascent of the day to the highest point, the Egetenjoch at 2,695 m, is before us and we soon pass the emerald green lake Egetensee. This is in fact the beginning of the “Seven Lake Route” which can be done as a day tour from Ridnauntal.

From the highest point we now go for a long, long way downhill. We thought we must have passed at least 70 lakes, each more beautiful than the last. Every lake was surrounded with a broad expanse of cotton grass which swayed in the wind like little balls of cotton. There really is no lovelier place to rest for a while.

Still going downhill, we hear a rushing waterfall for at least an hour as it gets louder and louder but we cannot see anything. When we finally see it we are absolutely overwhelmed. Huge water masses fall from the Übeltalferner (a big glacier) down through a steep canyon to the flood plain in front of us.

It is a kind of stone desert where the mass of water spreads out. Our target for today is the Teplitzer Hütte and we can see it, high above us on the mountain. We know that for the last stage we must climb up at least another 300 meters. Before we get there, we still have to cross the roaring mountain stream via a rather shaky hanging bridge. Then came the sudden steep ascent. These 300 meters feel like climbing an endless spiral staircase.

After a long day but a day full of super experiences we finally reach the Teplitzer Hütte. From here at 2,586 m the views are spectacular. We see the whole range of the Dolomites, the Übeltalferner is quasi directly in front of the chalet and the Becherhaus (neighboring building) is only a stone’s throw away. We enjoy this view for a long time until the sun goes down and we take leave of the day.

Tour Day 4: From the Teplitzer Hütte to Maiern, walking time about 4 hours and around 290 m uphill, 1,400 m downhill

The last stage of our tour takes us south again to the Ridnaun Valley. But first of all there is an uphill trek. We chose the route via the Hoher Trog at 2,833 m and the Pfurnsee lake, before we finally begin our descent.

The ascent to the Hoher Trog is very steep over block slopes, past snow covered areas and frozen lakes. In some of them there really are blocks of ice. Until recent times there was still a glacier here and you can see this in the rock formations. Even at this height we were still accompanied by a lot of sheep!

After reaching the highest point there was a 400 m steep and stony path down to the Pfurnsee lake. The day was really warm and the descent really strenuous and so we all jumped into this mountain lake! The lake is situated at around 2,457 m above sea level and we are still wondering about the water temperature …

Then refreshed and strengthened we continued the strenuous descent where we faced the challenge of steep meadow slopes with a view directly down to the bottom of the valley and in part a few sections along the rock face secured by ropes. In the early afternoon we reached the Aglsalm at 2,004 m. Here we rested, but only for a short while as we still had almost 700 m to go downhill. In the valley at around 1,700 m we then took our last break of the day. We gradually took our leave of the tour and the mountains.

The last part of the route took us through the Burkhardklamm. This was definitely a successful finish before getting in a taxi from Ridnaun valley which brought us back to Sterzing.

Conclusion: A wonderful tour through solitary but totally diverse landscapes. High above the valleys, close to or right at the top of the peaks!
Thanks go to my fellow hikers, my father and two sisters Susi and Andi.
… So where shall we go next time?

The Different Types of Cross-Country Skiing