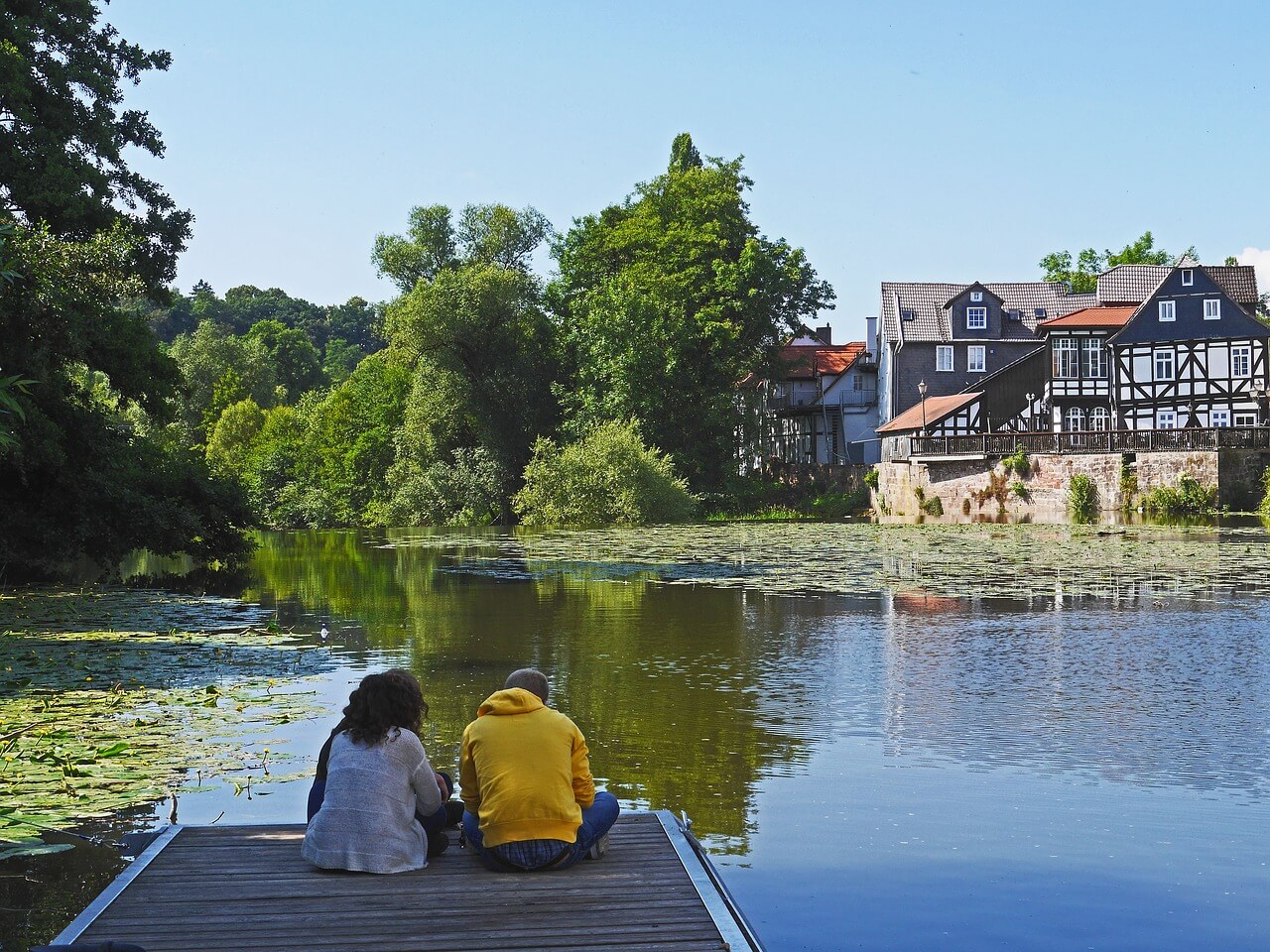 The Lahn is a relaxed, diverse, meandering river. On its banks imposing witnesses of history and charming little towns just wait to be discovered: Ideal also for a combined active holiday of canoeing, hiking or biking. Go on tour with TATONKA and enjoy canoeing with even strokes as you take time out from the daily routine.

The Lahn arises in the south east of the Rothaargebirge and is one of Germany’s most popular rivers for water sports or river tours. With its many locks, many of which are operated by hand, and the gentle swirling waters, the Lahn is suitable for beginners as well as for experienced canoeing experts.

Interesting facts about the Lahn

You should plan around 14 days for a paddle tour on the Lahn if you want not only to paddle the 170 km waterway but also to enjoy visiting the historic sights along the river banks. Overall the tour includes seven portage distances and 23 locks so a foldable canoe cart definitely belongs in your boat. Eleven locks between Gießen and Steeden have to be operated by hand. When you have passed through a lock you should make sure that the lock chamber fills up again with water for the canoeists who come after you. From 1st April to 31st October you pass through the locks every day from 10 till 12 o’clock and from 12.30 to 18.30 hours.

Reading recommendation: Basic knowledge: Paddling the Canadian Canoe – How to master all challenges with the right paddling technique

Modern infrastructure for this river rich in history

Impressive and well-conceived is the infrastructure along the waterway: In the last few years numerous comfortable possibilities have been created for embarking and disembarking. Litter bins and dry toilets at these embarkation points help to protect the natural and varied beauty of the river. You should only land at the places signed as landing places. Before setting off on your trip you can obtain information about the Lahn, its special features and guidelines for behavior in the “Merkblatt für Wassersportler auf der Bundeswasserstraße Lahn”.

From Marburg to Roth

From the starting point at the camping site Marburg to the estuary at Lahnstein, canoeists can expect a comfortable, in part very calm journey with only a few more turbulent stages. Nevertheless you should not forget that a change in the water level can quickly turn it into a fast-flowing river, with all its pitfalls.

Enchanting peace and densely forested hillsides accompany you in many stages of the water tour. The Lahn flows in a huge loop towards the town of Roth, the only place in the state of Hessen to be completely fortified with levees.

After Roth the Lahn picks up a little speed, with smaller fast flow areas as it gently winds its way through the Lahn meadows, the flood plain where numerous local birds have found a good place to breed and to find food. Here the river becomes very calm; the small wave movements just cause a few splashes.

For those who wish to begin the paddle tour not in Marburg but downriver, there is an ideal embarkation place at the Odenhausen Festplatzwiese; here a kiosk provides snacks and beverages before you start off on your river tour. Later, the canoe rides through the Marburg-Gießen-Lahntal, designated as IBA (Important Bird Area) and home to more that 400 bird species in a protected natural environment.

Nature and culture on the banks of the river

So now you have been paddling for a long time and have reached the Wissmar Lake with its fine sandy beaches; Canoeists, having registered at the adjoining camping site, can set up their tents above the embankment.

The Lahn had gained in speed but now reaches the town of Gießen quite calmly. Here the river banks are lined with allotments and weekend cottages. There is a river access to the bordering grounds: When the water has streamed in to the boat canals and the lights have changed from red to green, you sail up into the channel, pull in your paddles and just go with the flow.

There is a huge glass pane, the so-called “Lahn Window“, through which you have a super view of the illuminated area of fish migration. A visit to the historic town on the river bank is definitely worth it. The River Lahn flows past the town of Wetzlar, with a history going back to the 8th century. The imposing Cathedral is one of the oldest churches in Germany.

Setting a target distance with an exciting past

Interesting and because of its position in the Nature Park Hoch-Taunus also very attractive would be a small excursion to the Burg Braunfels, the “Neuschwanstein of the Lahn”. Another recommended excursion is to the mine “Grube Fortuna”. Here you will be let down 150 meters into the depths in a transport cage for a visit to the former excavation areas of the Grube Fortuna.

Now there is a more active current as you travel through the gentle hill landscape where the range ends in the Leuner Burg. The River Lahn continues past places like Biskirchen, known for its carbonated spa and mineral springs, and the next place Selters, world famous for the quality of its water.

The Lahn: Once a major traffic waterway, now a meandering river with a wealth of variety

Beyond the railway bridge at Weilburg you then enter the Weilburg Schifffahrtstunnel, that with a length of about 200 meters leads through the Mühlberg and is today the only navigable water tunnel in Germany. It bears witness to the former importance of the Lahn as a means of transport that from the late Middle Ages served the transport of mined ores.

Canoeists who want action but who are also interested in history should not go through this tunnel immediately but should first tie up at the Weilburg Rowing Club and take a tour through the picturesque residence town with its half-timbered houses. The Castle Weilburg is one of the best preserved Renaissance castles in Hessen. Equally spectacular is the “Kubacher Kristallhöhle”, a crystal cave unique in Germany and the highest situated of all caves in Germany open to tourists.

Nature in all its variety, exciting water phases

After the lock in Kirschhofen the Lahn does not flow alongside the road but only along the rail line, cycle paths and rambling routes. This part of the route is quiet and calm, through forest and dense woodland. After the Fürfurt weir, the current gets stronger and faster. Runkel is another interesting stopover on your tour; from here you can go on a hike through the Kerkerbachtal or along the historic route of the Kerkerbach railway.

A most interesting part of your tour is the stage from Runkel to the Villmar Lock; this leads you past the imposing “Bodensteiner Lei“, a huge limestone outcrop that protrudes vertically over the water. Spectacular is also the Marble Bridge of Villmar, as you glide underneath it: Built in 1895 it is the only marble bridge in Germany. In the lush and fertile Limburg Basin the River Lahn is also navigable for motor boats etc. and here there is clearly more water traffic.

Experience the Middle Ages in Limburg

As an architectural masterwork, the Cathedral of Limburg with its 7 turrets rises into the sky. Limburg is one of the very few German towns in which the medieval architecture was not destroyed. One particular attraction is the “Haus der sieben Laster”, a house where there are carvings of grimaces in the roof beams that were to remind the pilgrims confessing their sins in the cathedral of the seven deadly sins. These carvings are said to have been incorporated into this building in the second half of the 16th century.

From Limburg the Lahn flows gently in the direction of Dietz; at Balduinstein the river becomes shallow. Here the hills rise to 200 and up to 400 meters. The river then makes a wide loop between the Cramberg lock and the “Cramberger Bogen” – so generous that if on foot, there are only several hundred meters to cover. If on the other hand, you wish to paddle the seven kilometers on the water, you will certainly enjoy a relaxing tour through lush natural surroundings.

The canoe will soon pass the Gabelstein; the whole surrounding area has been declared a nature reserve “Gabelstein-Hölloch” where numerous attractive hiking trails can be found. Here the river Lahn is enchanting, with thick foliage on both river banks, not to mention an amazing bird chorus.

Water and Wine: Obernhof with its noble juice of the grape and picturesque hiking trails

Only a few kilometers later the dense forests open up and you have a splendid view over the vineyards on the slopes around Obernhof. In this region mostly Spätburgunder (Pinot Noir) and Riesling grapes are cultivated, all in accordance with centuries of winegrowing tradition.

The Haxel vineyard for example is a must-visit not only for wine lovers: From here too, you can start off on a number of hiking tours, including along the Jammertalweg or a part of the Lahnhöhenweg from Oberhof to Katzenelnbogen or from Obernhof to Laurenburg. The nearby Arnstein Cloisters, nowadays housing a youth center for encounter, was first mentioned around 1050 as the seat of the Count of Arnstein and is deemed to be the eldest fortress on the River Lahn.

Discovering Germany on Foot – along the Lahn

Equally charming hiking trails and other outdoor offers are found in the climatic spa resort Nassau at the heart of the nature park Nassau, embedded in the heights of Taunus and Westerwald. The Lahn hiking trail starts off near to the canoe club Nassau. In 2010 it received the hiking award “Wanderbares Deutschland”. To date the Lahn hiking trail has a length of 65 kilometers and runs from Lahnstein and Diez through the nature park Nassau. At the end of 2012 it will be extended and will then reach from the original spring to the estuary of the Lahn.

From the ancient Romans to Imperial times

From the lock at Nassau it is about three kilometers to the small town of Dausenau with its medieval curtain town wall. Traveling in the direction of Bad Ems you will also paddle towards the Roman tower, the oldest reconstruction of a Limes tower in Germany. From the viewing platform there is a breathtaking and fascinating panorama of the Lahn valley, the Taunus and the Westerwald.

The historic Limes boundary wall, 550 kilometers in total, runs through the former Imperial Spa, Bad Ems, the next stage on the Lahn Paddle Tour. As well as imposing spa buildings, monuments and historic architecture, this spa town was in the 19th century the flourishing “Summer Capital of Europe”, offering travelers sublime charm.

Only a few kilometers away is Lahnstein, where the Lahn flows into the Rhine your tour could end at the camping site “Runkel” after the Ahl lock from where there are superb hiking routes leading in the picturesque Schweizertal.

Via Ferrata tours in Switzerland and Austria