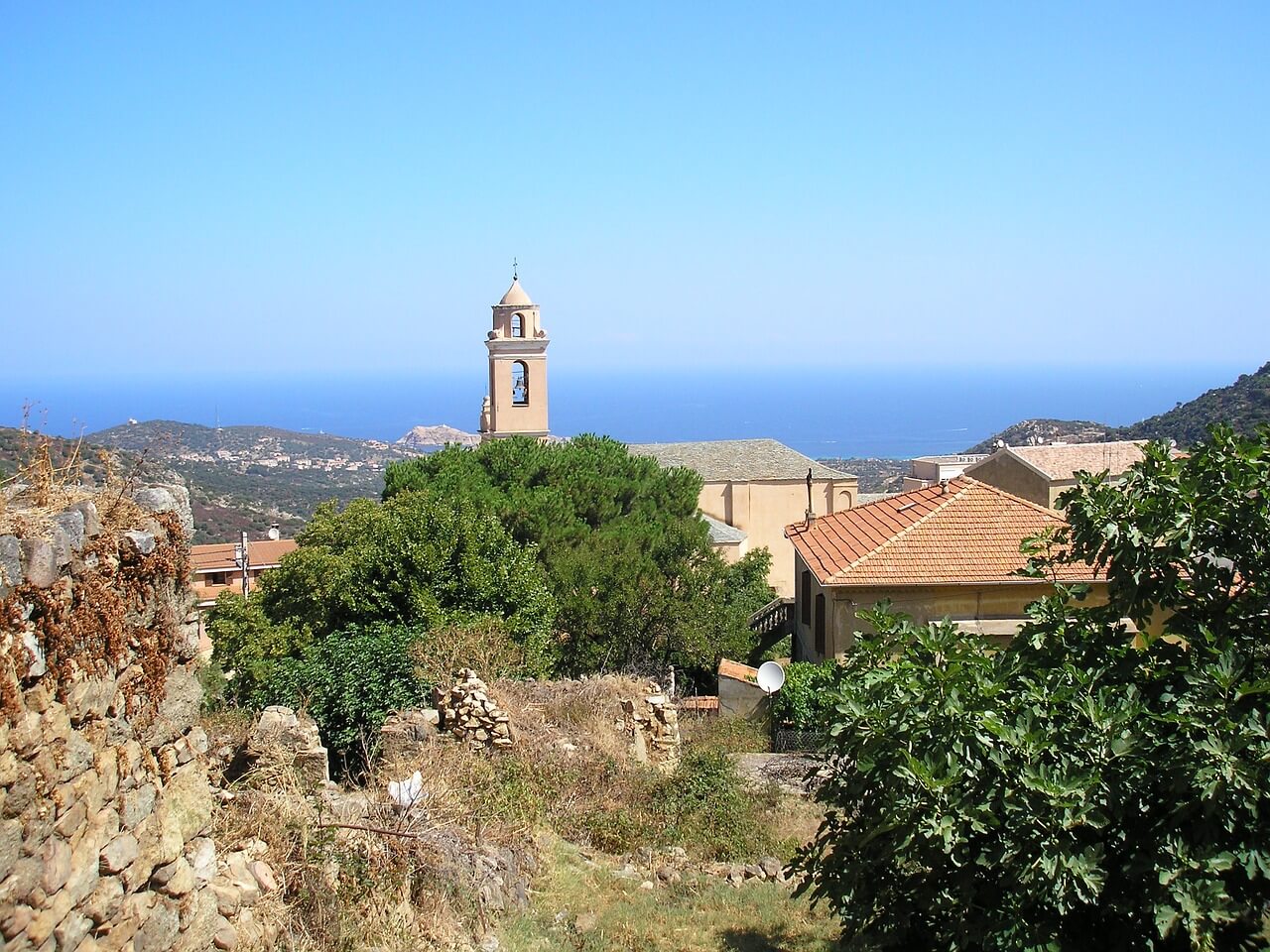 For over 20 years now, I have kept coming back to the “Isle of Beauty.” An article in a Surf Magazin in the 90s on surf spots rich in wind and waves in the north-west of the island, the Balagne, lured me to Corsica for the first time. Back then, I took my VW bus, packed my camping equipment and put the surfing materials on the roof to start exploring the island – and I have returned every year ever since.

While during the first years I would focused on finding the perfect surfing spot, I later went on to visit the heartland. The Bavella mountain chain in the south of the island as well as the high mountain chain around the Monte Cinto, with 2,706 metres Corsica’s highest mountain, were the destinations of many tours.

The former fishing port of Algajola in the north-west, set between Ile Rousse and Calvi, with its idyllic alleyways, squares and the fort as well as the adjacent beach of Aregno became my port of call.

Separated only by a small rail track, the “Camping de la Plage“, an extensive camping site with great pine and eucalyptus trees, is located right next to one of the longest and most beautiful beaches of the Balagne – the “Aregno Plage”. Thanks to its location, the camping site offers the perfect starting point of many different outdoor and fun-sport activities.

And it was this very same beach with its great surf’s up that made me go to Corsica in the early 90s. Whether you would like to windsurf, surf ride, body board, do stand-up paddling, snorkelling or diving – depending on the wind and waves, every aquatic sport is possible!

When the Mistral hits the island coming from the mainland with 5-6 bft, the conditions for windsurfing and kiting are perfect. During light sea breezes you can watch the Mistral getting closer to the beach and make out the whitecaps of the sea at the horizon. The wind reaches the shore from the left and, within the first two days after the Mistral has started, forms a wave of up to two metres. Every further windy day makes the waves go higher. I have experienced waves up to 4 metres high.

Once the Mistral weakens it is time for the surfers and body boarders to hit the water. The stormy Mediterranean Sea sends long, metres-high waves to the beach.

On less windy days, the turquoise-blue water with an almost plain surface is the ideal setting for snorkelling and diving. Near the rocks on the right side of the bay you’ll find many shoals of fish, some rays and also little octopuses. You do not have to snorkel out far to find the first fish. And even for the kids it is easy to discover the underwater world in this area.
But it is not only exciting for water sportsmen: When you follow the long sandy beach, you will reach a cliff scenery which is covered in macchia.

One of the first and most successful Tatonka rucksacks is back: the legendary travel backpack Great Escape! Beside the padded, coverable carrying system the backpack offers naturally a large suitcase opening for comfortable packing.

From the mountain bike right to the climbing wall

Climbing and boulder fans find their perfect setting including an amazing view over the sea and the heartland right at the water. You don’t need a lot experience to explore the various mountain bike trails. Even as an MTB beginner, you can have a great time and enjoy the turquoise-blue sea, the golden beach and the stunning heartland.

At the end of the headland, a 12-metre high granite wall with eyes for hooking in the carbines awaits climbing enthusiasts. Several rocks, which are rough and gripping due to their high share of granite, are perfect for boulders.

Hikers can find dreamlike ways and paths in the Balagne for everyone’s taste. Numerous villages picturesquely adorn the mountain hills, what the macchia and a mixture of plants such as lavender, myrtle, thyme, tree heath, cistus, broom or juniper call their home. The Monte Grosso mountain chain in the hinterland extends to up to 1,937 metres and outlines a fascinating scenery when sunlit.

A lovely day tour for children starts at the camping site. A small path goes past the small beach restaurant “Rotta Bar“ further into the hinterland towards Corbara, one of the first mountain villages on our tour.

Corbara lies safely behind a rocky hill with an old ruin on its chine. From up here, you have a wonderful view on the bay and the mountains in the distance. We continue on the D151 towards Pigna and Aregno, past several tombs that stand on both sides of the path, up to the Convent of Corbara, St. Dominique, from the 15th century.

From there, a small path [IP1] leads up to the cliff where the village [IP2] of Sant’Antonino lies 500 metres above sea level. It is one of the most beautiful and presumably oldest mountain villages of Corsica. Narrow alleyways and houses built on rocks, decorated with flowers and pottery, form the character of Sant’ Antonino, which is also often referred to as an eyrie.

Right near the entrance to the village we stop by at Olivier Antonini, a fruit farmer, who offers freshly squeezed lemon juice in his restaurant “Maison du citron”. The juice is also called the “Corsican Red Bull” [IP3] . If you’re still up for continuing your tour and to discover other villages, don’t rest for too long.

On our grand hike the next destinations are Cateri and Lavatoggio. The mountain road continues towards Lumio and for the first time we can see Algajola’s backyard mountain! A small path leads over the mountain back to Algajola. If you want to go back to Algajola directly from Sant’ Antonio, stay in the direction of Aregno and from there take the D551, where your hike will take you past olive trees and heards of goats. A special highlight at the entrance of Aregno is the small, towerless “Eglise de la Trinité”, a pisan-romanesque[IP4] church from the 12th century, which is located on the cemetery.

Fly with the buzzards

If you came to Corsica for paragliding, you cannot expect take-off sites as you know them. Small, rocky take-off sites, which are even partly overgrown during springtime, have first to be cleared with a little axe or machete. There are several take-off sites in the Balagne – most of them are oriented to the northern wind directions.

Watch out! Always keep an eye on the sea when paragliding. When you see the first whitecaps on the horizon, quickly start landing! It has happened to me once that the Mistral took me by surprise and I had to land during strong wind. A landing I do not want to have to relive.

You’ll find the most beautiful take-off site on Algajola’s backyard mountain. The ascent from the village takes around one hour. The site is located at 280 metres, the highest point of the mountain. Soaring near the backyard mountain for hours while experiencing Algajola with its beach from the bird’s eye view is pure enjoyment. The best spot to land is preferably in the middle of the beach, right in front of the camping site.

You can find further take-off sites near the ruin in Corbara (300 metres above sea level) – it’s perfect for flying in the north-west wind. The beach of Corbara, also called “Plage de Giunchetu”, is the designated landing site.
Another take-off site is located at the flight training school “Altore” at the Col de Salvi, right next to the D451 in the Calvi hinterland. There they also offer tandem flights.

Off-road in the “Désert des Agriates”

Motorcyclists and trail bikers can find many suitable roads for their hobby. Between Île Rousse and St-Florent, northerly along the D81, lies the “Désert des Agriates”, a semi-desert on around 160 square kilometres. A sandy and loamy [IP5] runway with numerous potholes winds its way through the rock landscape, where you will find goat and snake carcases by the wayside.

After an adventurous drive up north through scarce landscapes, you will be rewarded with one of the most dreamlike sandy beaches: The “Plage de Saleccia”, the “Plage de Ghignu” or the “Strand von Trave” consists of perfect, fine sand and crystal clear, turquoise water.
On your way out there, make sure to bring enough water with you.

Heyday and the Indian Summer

The most beautiful months in Corsica are April, May and June as well as September and October. If possible, do not visit the island during July and August. During this time, crowded beaches and expensive accommodation quickly let the perfect picture of the Mediterranean island fade.

In spring, the island shows off with its most colourful and beautiful side, while in autumn it seems dry and bleak. But even then, water sportsmen enjoy the pleasant water temperature of the sea.

To everyone who now feels like experiencing the “Corsica adventure” and think of spending their next holidays on the “Isle of Beauty”, I wish a wonderful, exciting and relaxing time!